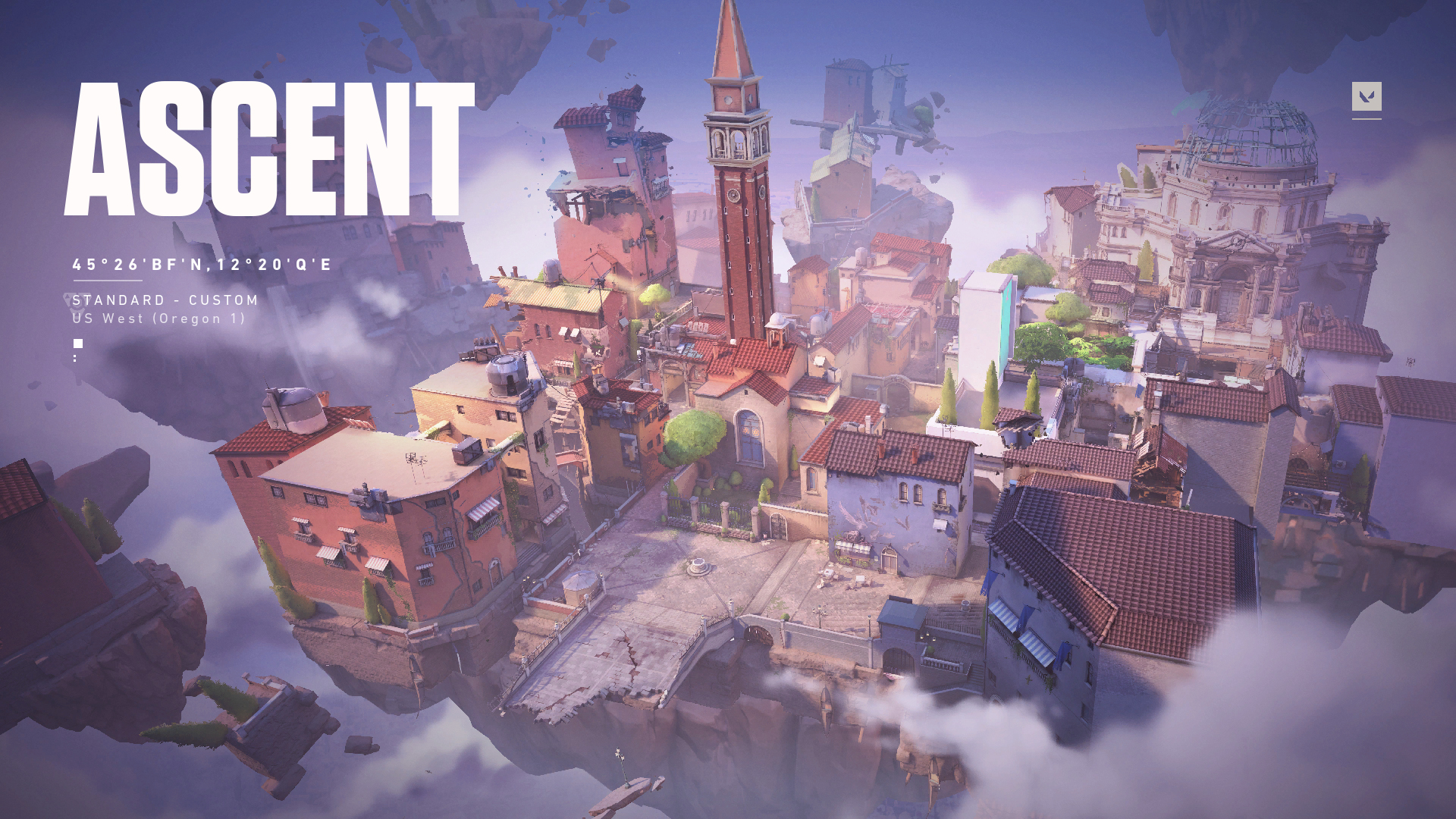 Ascent is one of the seven maps currently featuring in Valorant and the 4th playable map to be added to the game. One interesting thing about Ascent is that it’s based around a floating chunk of land in Venice, Italy. The map resides in the top 3 most popular maps for players.

Ascent is a pretty standard Valorant map featuring two bomb sites and a large open area in the middle that players will often fight for control of. Let’s talk about the features of all these map locations.

On A Site, there’s a big generator and some boxes that players will often use for cover. There’s also a walkway with an area underneath for players to hide in either while defending the site or after planting the spike.

Players can access A Site via A-Main, A-Link, or the aforementioned walkway, which is often referred to as “heaven” or “rafters.”

The planting area for B Site is quite open, though there are many areas nearby for players to hide in, including B Back and B Logs.

Players can access B Site either via B Main, Mid Market, or Defender Side Spawn.

Mid map has a few boxes that players can use for cover, but generally, it’s quite open and dangerous to walk through, so be cautious around here.

Every map in Valorant has some special feature or dynamic element incorporated into it. On the Ascent map, it’s the interactive doors. There’s one near each of the two bomb sites. They are operated by wall-mounted switches, which players can interact with once the round starts.

Closed doors will block crucial routes into the site, but it’s worth noting that players can break them relatively quickly as they don’t have much health.

Next, we’ve got some general tips for playing on the Ascent map:

The main areas that enemies like to hide on A Site include A Rafters, A Gen, and A Hell, so it’s a good idea to use abilities to clear those places. A Wine is another place to look out for, especially if you’re rotating to A site, as chances are someone has had time to move into position there.

Planting the spike in front of A Gen is usually the best place for it as the generator provides cover, and you can get a good line of sight on the bomb from A-Main. If you feel you need more cover, you can also plant it further around to the left of the generator, but just bear in mind that you won’t have an easy line of sight on the bomb post-plant.

On defense, it’s important to remember that enemies can come from both A-Main and Mid Cubby, so it’s a good idea to keep an eye on both.

In addition to A Rafters, A Gen, and A Hell, other spots to hide in that are perhaps a bit riskier include behind the tall box on-site and on top of the stacked boxes next to the A Main entrance (if you have a teleporting or flying agent).

Also, just as a general rule, be careful hiding behind anything wooden on A site because chances are bullets will be able to penetrate through.

When attacking the B site, it’s vital to use smokes to block off Defender Side Spawn and especially Mid Market so that you can avoid getting shot in the back when running onto the site. Also, be sure to clear both B Logs and B Back, as players like to hide there on defense.

If you have Sage on your team, one good strategy when attacking is to wall up in B Main and peak through the railings to pick off unsuspecting enemies.

In terms of planting the spike, the best spot is probably behind the boxes in the center of B site because of the cover they provide, but you can also plant it near the stairs if you want to hold from Defender Side Spawn.

B site can be difficult to hold, but generally, you’ll want to position yourself either in Mid Market or Defender Side Spawn, as you’ll be able to fall back and wait for backup if needed easily.

You can also hide in B Logs or B Back as mentioned above, but just we wary that you won’t be able to get out easily and will more often than not get immediately traded if you do get a kill or two.

Retaking B is generally easier than holding it, so do fall back if you need to. There are plenty of great ultimate that can help with the retake too, including Killjoy’s and Breach’s, as well as Brimstone’s for clearing out B Back.

To close out our Ascent map guide, let’s talk about some of the significant changes Riot Games has introduced to the map over the course of its lifespan.