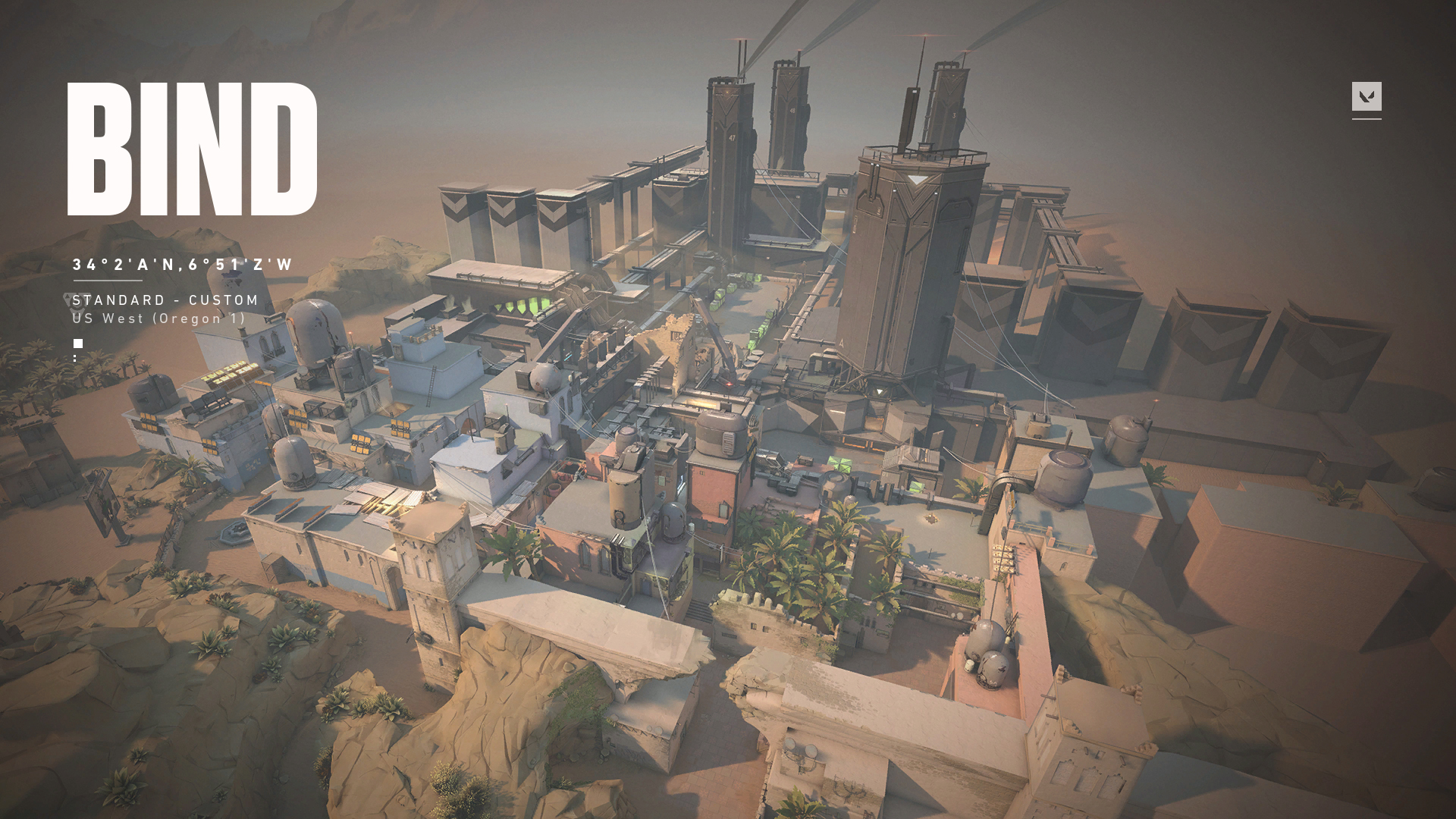 Bind is one of the seven maps currently featuring in Valorant and was released at launch alongside the Haven and Split maps. It’s based in Morocco, where Agent Cypher comes from, and features a desert-like climate.

Bind has two sites and is unique in that it doesn’t feature a mid-section. Instead, there are two paths onto each site and teleporters to quickly travel around the map. Let’s talk about the site features and the teleporters.

A Site is quite open with a front section and a back section separated by a tank and some crates. A Tower gives players a good view of the map, but there are plenty of cubbies to hide in that are out of sight. Also, a path through A Lamps connects the front and back of the site that players will often use.

B Site is relatively small compared to A Site, and though there aren’t a lot of cubbies to hide in, there’s a central tube that provides a lot of cover for both attackers and defenders.

There’s also a path through B Elbow that provides a safe way for players to get from Defenders Side Spawn to the other side of the site or vice versa.

Every map in Valorant has some special feature or dynamic element incorporated into it, and on the Bind map, it’s one-way teleporters. There are two of these contraptions located on the map – one next to A site in the center of the map that takes players to B short, and one in B long that takes players to A lobby – and they both allow for high-speed rotations.

Next, we’ve got some general tips for playing on Bind:

When attacking A site, it’s generally a good idea to smoke off A Tower and clear out A Lamps, as that’s where defenders will often be hiding.

If you’re coming from A Short, planting in from of the tank on-site is usually the safest place to do so, and if you’re coming from A Bath, you’ll want to plant in the missing space between the three stacks of boxes. In both cases, a Sage wall can be a massive help in blocking off angles, so consider having her on your team when you play on Bind.

There are many places you can hide on defense, but it’s generally safer to stay around the back of the site or in A Lamps as attackers often push very quickly onto the site.

Play for a retake if you have to, and don’t be afraid to use your utility to slow down enemies and give your teammates time to rotate to you.

When attacking the B site, you’ll want to use your utility to clear the back site and tube as you push on so you don’t get surprised by a hidden enemy. You’ll also want to check all your angles if pushing through Hookah, as defenders will often be positioned there.

Also, if you want to play it safe, you can push up B Long slowly and take the teleporter to safety if things get rough.

For B site, you’ve got a lot of options on defense. If you’re going to be watching Hookah, you can either sit in Hookah with a shotgun and watch close angles or watch from afar either behind tube on-site or in the doorway leading to Defender Side Spawn.

If you’re watching B Long, on the other hand, you can hold the angle from either side of the tube or just wait in B Elbow until the enemies push on site. The B Elbow angle is solid because you have a clear view of any enemies coming from both Hookah and B Long, and you can easily retreat if need be.

To close out our Bind map guide, let’s talk about some of the changes Riot has introduced to the map throughout its lifespan.