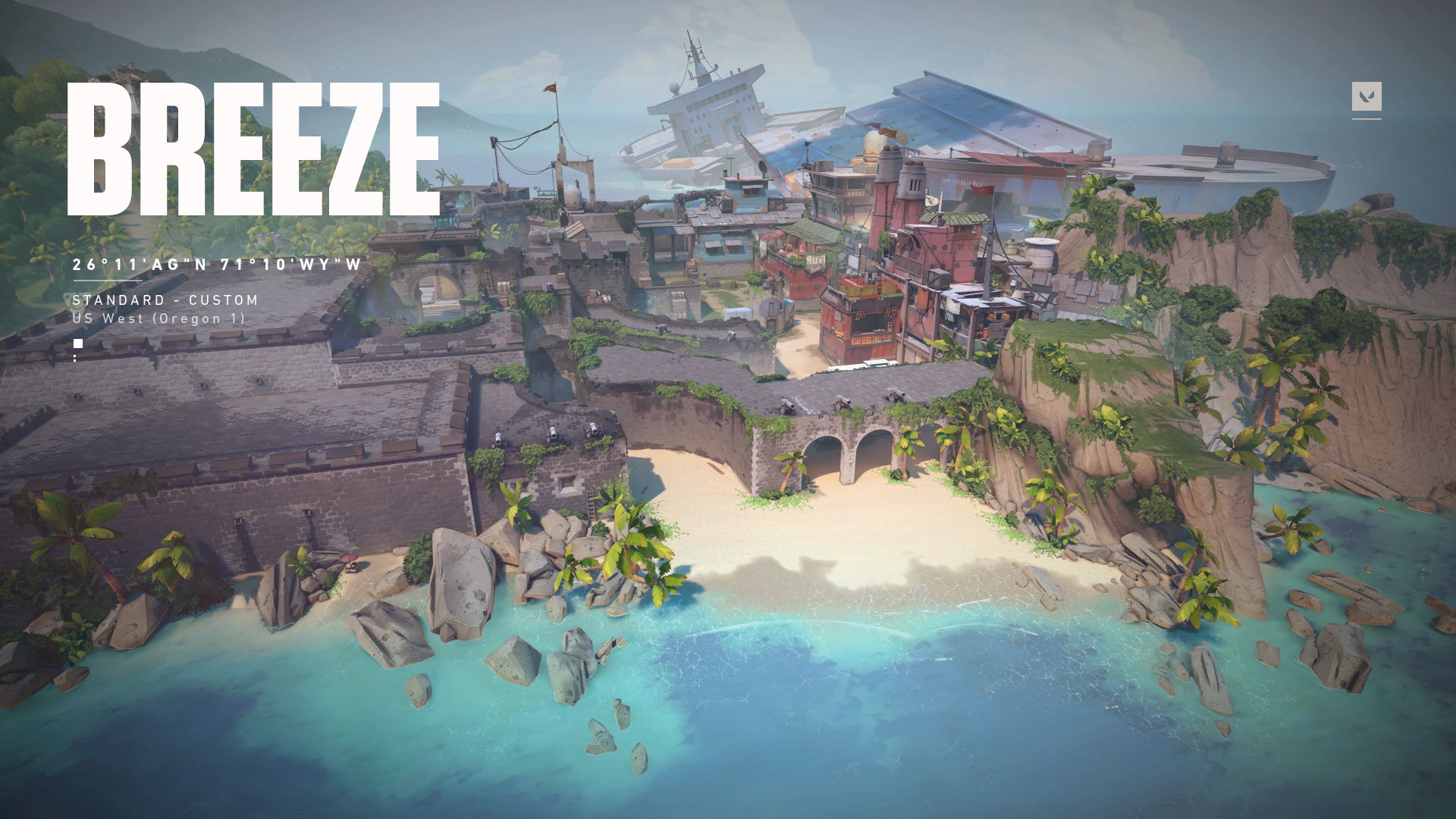 Breeze is one of the seven maps currently featuring in Valorant and was the 6th to be released overall. It’s set on an island in the middle of the Atlantic Ocean and has major tropical paradise vibes.

Breeze is a very open map compared to the other ones in Valorant, with two large sites on either side and a big middle area that players can cross through. Let’s talk a bit more in-depth about the different areas of the map.

A site is quite open, with two large pyramids in the center surrounded by shallow water, which is the planting area. There’s also a large orange shipping container near Defender Side Spawn that gives defenders some cover when pushing up.

The B site features a large pillar in the center with the spike planting area. There’s a back area that provides a lot of cover from all angles, as well as a wall near Defender Side Spawn that you can take advantage of as a defender.

Breeze has a few different dynamic features, including ropes, a mechanical door, as well as a one-way chute. They’re all in and around A Hall (or tube, as many players call it), and both attackers and defenders can take advantage of them in different situations.

The ropes can be used silently, allowing for undetected flanking opportunities. The chute can be used to drop into Mid when needed quickly. The mechanical door can open up a new way to enter A site.

Next, we’ve got some general tips for playing on Breeze:

A Site has a lot of angles to worry about, so when pushing on, you’re going to want to make use of your initiator agents to clear everything out. Additionally, smokes will come in handy, so make sure to use them on A Bridge and A Switch.

Using a Viper wall across the two pyramids can also be a massive help in getting you onto the site and planting the spike safely.

Defending A Site can be tricky, especially if the enemy has a Viper, so it’s best to stay near the back of the site and play for a retake if you can. Using utility on the A Cave entrance to try and slow down your enemy’s push can also be very useful and gives your teammates time to rotate and back you up.

If you want to be a bit riskier, you can also hold the close angle outside the A Cave entrance with a shotgun and hope to get a pick or two.

For B Site, you’ll generally want to smoke off B Tunnel and Defender Side Arches and clear out B Back as quickly as you can. Once you’ve managed to secure the site, it’s best to then plant the spike just behind the crate on site, as you’ll then be able to hold angles on the bomb from both B Back and B Window.

B site can again be tricky to defend, so it’s best to play a bit further back and use utility to slow down the enemy push through B Main. You can also hold the B Main angle with a sniper from either B Wall or from behind the pillar on site.

One other thing to mention is that enemies will often push through B elbow, so it’s a good idea to have someone positioned in Mid Nest to keep an eye out.

To close out our Valorant Breeze map guide, let’s talk about some of the changes Riot has introduced to the map throughout its lifespan.