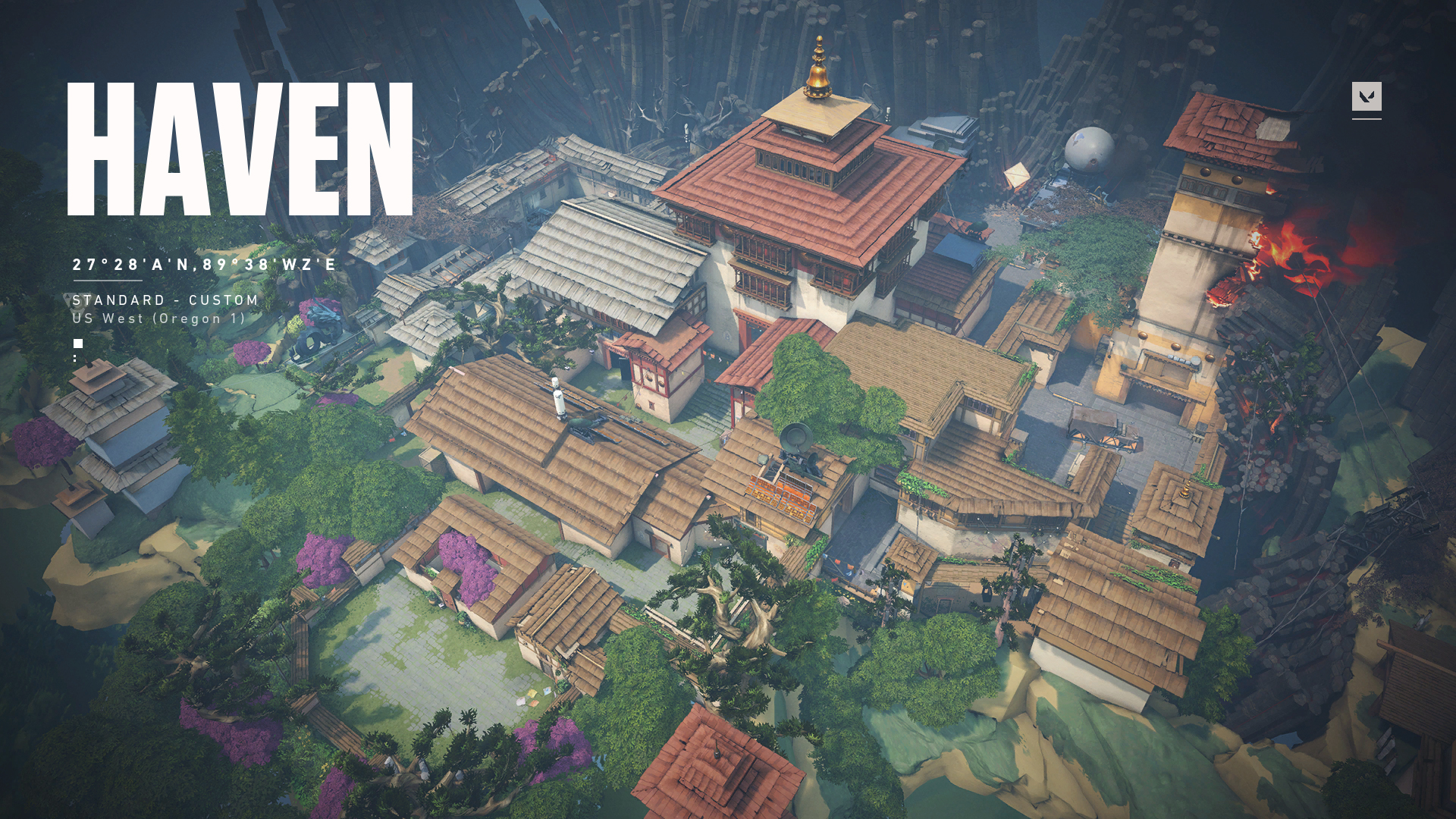 Haven is one of the seven maps currently featuring in Valorant and released alongside Bind and Split at launch. It’s based in the mountainous country of Bhutan in South Asia.

Haven is the only map in Valorant with three bomb sites, making it one of the most unique maps available in the game. In the Haven map, there are a lot of interconnected paths, meaning you’ll need to be super wary of your surroundings when wandering around, so you don’t get caught off guard by an enemy.

Here’s a bit more info about the three sites.

A Site is right up against the edge of the map and can be accessed via 4 different paths from A Tower, A Link, A Long, and A Short. There’s a single clump of boxes smack bang in the middle of the site that you can use for cover, but there’s also a cubby outside of A Short and an area under A Tower that are good to hide in and hold angles from.

B Site is right in the middle of the map and can be accessed via A Link, C Link, or Mid Courtyard.

The site is made up of a solid, impenetrable structure with a planting area around it, and there’s a blocked-off area at the back (B Back) where you can stand and remain out of sight. There are also some stacks of crates against the wall closest to C Link that you can stand on top of if you have an agent with flying/teleport capabilities.

C Site has three entry points, is a lot more open than the other two sites, and has decent cover for attackers. The central boxes can be hidden behind, but there are also spots on C Platform and C Logs from which players can hold good angles.

Next, we’ve got some general tips for playing on Haven:

Now, let’s talk about the best ways to attack and defend the three sites.

When attacking A Site, it’s important to check your corners because there are a lot of cubbies in both A Short and A Long that players can be hiding in. Once you’re close to the site, you can then flash out, clear out angles, and plant, making sure to smoke off A Link and especially A Tower, as enemies will often catch you off guard from up there.

When defending A Site, you’ve got a good line of sight down A Long, so try and take advantage of it. By pushing up slightly, you’ll be able to see any enemies crossing through A Lobby, and you’ll be able to fall back and call for backup if you need it quickly.

Also, put someone up in A Tower because you can see most of the site from there, and it’s a solid position to be on defense. Just be wary of enemies below you if you’re going to be dropping down onto site.

B Site can be tough to attack, but you can make it work if you run it down Mid Courtyard with the proper utility usage. Just check B Back when you’re out on site, as enemies often like to hide there.

When Defending B Site, try not to peak too much and aim to hold angles on Mid Courtyard from A Link or C Link so you can catch your enemies off guard when they push in. Don’t be afraid to fall back and call for backup if you get overwhelmed with flashes and other utilities.

Attacking C Site is best done by either smoking site and pushing up C Long or securing the Garage and flashing out onto C through there. C Site is quite large, so be wary that enemies could be anywhere, and it’s essential to clear out every spot.

For defense, holding C Long from behind C Platform with an Operator or long-range rifle is a great way to hold the site and can deter enemies from even pushing up that path.

There are lots of other places on-site you can hold angles from too, but equally important is having someone watch Garage as enemies will often push up here fast. Try to use some utility to slow them down if you can.

To close out our Haven map guide, let’s talk about some of the changes Riot has introduced to the map over the course of its lifespan.